Our Home Base is at 4 Hotham Road Sorrento, the former Southern Peninsula Rescue Squad helipad. We are opposite the Hotel Sorrento and right next door to the Sorrento Police station. The building has gone through a few upgrades since we took over the lease in 2018.

We were fortunate to be awarded a Victorian State Government grant to cover the estimated cost of installing heating and cooling at the Hangar. Our President, John Stevenson, did some wheeling and dealing and a superb unit is now installed and operational. The Tuesday Card Group members have been very happy to make full use of the options.

We have been plagued with leaking skylights in the side rooms. Some initial repairs from our members were just a temporary step. We have finally had the Shire review and replace the aging roof across the building. It’s going to be great to have items stored in these rooms without fear of more water damage.

December 2020: The kitchen cabinets are installed!! 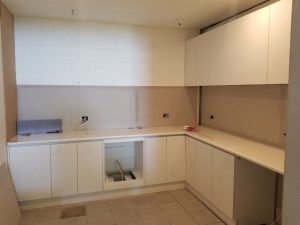 July 2020: The reviews are complete and a design has been approved by the Committee. Time to organise the build.

February 2020:  A review is underway of what the members would like in the way of an update of the kitchen facilities. There is currently a very basic setup which is very limiting. A review group is looking at options.

January 2020: A Serious Upgrade to Facilities and the Building

We approached the Shire re updating the toilet facilities at the Hangar and were awarded funding in the Shire budget. We now have a Unisex toilet, incorporating disability support. The existing toilet suite was also updated.

At the same time, a number of maintenance issues were addressed restoring the external appearance and removing potentially dangerous building damage.

A number of sites in and around Sorrento were looked at. These included the disused Southern Peninsula Rescue Squad helipad, the vacant Visitor Centre at the entrance to the Point Nepean Park, a vacant block of land at the end of French Street in Rye, Senior Citizens Centre, William Road Blairgowrie and land in MacFarlan Reserve, Sorrento.

The Hangar in Sorrento Park looked to be the most suitable of the sites reviewed. Lengthy discussions followed with the Mornington Peninsula Shire over access to the disused former helipad site. Eventually an agreement was reached that a temporary lease could be issued, deeming the building as a “place of gathering”.

PNMSA took possession in November 2018. The building has been cleaned up and the interior restored as a great place for the men to gather for meetings, presentations, small events and small construction exercises.

A formal lease was issued for 12 months. An agreement has been reached to extend this lease through to the end of 2021. We continue to negotiate a standard 10-year lease option.